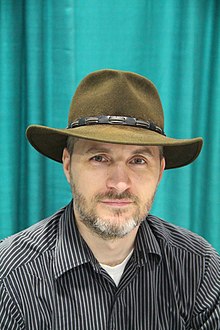 Dan Wells writes in a variety of genres, from dark humor to science fiction to supernatural thriller. Born in Utah, he spent his early years reading and writing. He is the author of the Partials series and the John Cleaver series. He has been nominated for both the Hugo and the Campbell Award, and has won two Parsec Awards for his podcast Writing Excuses.

I was born in 1977, on March 4th—the only day of the year that’s also a sentence, so I may have been predestined to be a writer. (Okay, I admit, any day in March is technically a sentence, but March 4th is the only non-numeric sentence. So there.) My parents were avid readers and SF/Fantasy fans, and they began my education early: I saw Star Wars in the theater when I was four months old, my dad read me The Hobbit when I was six, and I’ve been hooked on everything like it ever since. In second grade I announced to my parents that I was going to be a writer, and promptly wrote a Choose Your Own Adventure book about a maze that was literally impossible to escape—no matter which options you chose, you just kept going around in circles. I’d like to think I’ve come a long way since then.

I grew up in the US, in the state of Utah, and spent my childhood reading, writing, and learning everything I could. I thought for a time I was going to be a poet, and I still have a strong love of poetry. I’d like to think that, some day in the far-flung future, I’ll retire and teach British poetry in a college somewhere; I’ll find a way to combine John Keats, Emily Bronte, and A.A. Milne into a cohesive curriculum. I imagine that I will do so while wearing a tweed suit, ideally with elbow patches. My assistants will be a pair of hunting dogs named Cecil and Percy.

We had a library just a few blocks from my house—the Sprague Library in Sugarhouse, a place very dear to my heart—though one of the intervening streets was a very busy one that we were forbidden to cross without our parents. When I was finally old enough to go the library on my own I went almost every day, devouring book after book until the librarians knew me by name. Here I discovered Anne McCaffrey, Robin McKinley, Madeline L’Engle, Lloyd Alexander, and Fred Saberhagen. As I grew older I turned to other genres—not because I’d outgrown the fantasy section, but because I’d read the whole thing and needed something new. I read science fiction. I read historical fiction. I read historical non-fiction and true crime. In high school I discovered “classic literature” and the likes of Charles Dickens, Joseph Conrad, Jane Austen, and Mark Twain. Hungry for more I started reading non-English works outside of class, and began a lifelong love of French and Russian literature through the works of Victor Hugo and Fyodor Dostoevsky.

Oddly enough, I never really read a lot of horror, but you can still see, looking at the list above, how I ended up as a horror writer. The brilliant misanthropy of Crime and Punishment and The Secret Agent; the devastating obsession of Les Miserables and The Count of Monte Cristo; the terrifying human potential of The Heart of Darkness; the hopeless grandeur of The Hunchback of Notre Dame; these fired my mind unlike anything I’d ever read before. I thought I was going to be a high fantasy writer, but everything I wrote had a dark undercurrent lurking in the background, begging to get out, and with each book I wrote I tested that darkness a little further. Eventually a friend (Brandon Sanderson who deserves full credit for this) called me on it and told me to just give in and write a horror book. Without a really solid grounding in modern horror I turned to the next closest thing I had: true crime, and my sidebar obsession with serial killers. It was like coming home—I don’t know how else to explain it. I’d been writing books and short stories for years, with varying degrees of success, but the instant I sat down to write about John Cleaver, teenage sociopath, I knew I’d finally found what I wanted to do.

Meanwhile, believe it or not, I had a life outside of books. I lived in Mexico for two years, and traveled to Germany for a few weeks. I got married and had five kids. I worked as a marketing and advertising writer in a string of local corporations, hawking everything from shampoo to fitness machines to humanitarian sponsorships. I volunteered on a small press SF magazine (The Leading Edge); I started a game review website (www.timewastersguide.com); I helped start a weekly writing group. In my spare time, such as it is, I am an absolutely rabid gamer—an entire room of our house is filled with tabletop miniatures, collectible card games, and my vast collection of board games.